Help! My Homeschool Child Was Bullied

He slowly walked along the sidewalk with his face pointed down to avoid eye contact. I reached for his chin when he got closer and noticed redness around his eyes.

I asked quietly, “Is everything okay? You look upset.”

His face dropped in embarrassment and his body language said that he had been hurt. He reached up and pushed my hand away so I couldn’t see his eyes.

After a few minutes of quiet, he looked up, pretending nothing was wrong.

“It wasn’t a big deal,” he muttered as if trying to convince himself. “They didn’t like my comments. I shouldn’t have said anything. I’m okay. Really.”

His eyes welled up with tears, and I felt my own beginning to build as I quickly searched for the kids who had bullied him. I thought, “Nobody messes with my son.”

“What happened on your walk?” I questioned. “This isn’t like you to get so withdrawn.”

“Listen to me; I want to get to the bottom of this right now!”

My middle school son would rather hide in the car than be viewed as weak in front of his siblings or me.

We loaded up the car and headed home, hurting hearts and bruised ego in tow.

Away from the public, he told me what happened in the park. 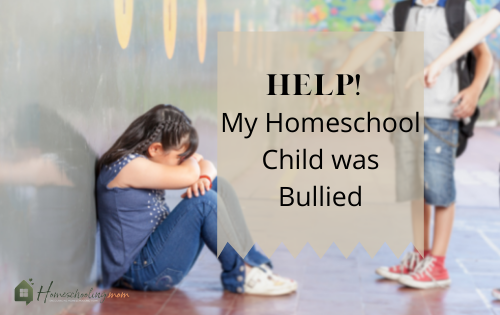 After working through a heap of mom guilt for not protecting him, I again began to tear up. This only made him feel worse about the situation.

I went on to tell him a story of my own—how I felt helpless, not knowing what to do. I continued sharing how I had wished my mom had known, as I’m confident she would have offered good advice…at least better advice than what my friends had provided. They had said it was no big deal, but I disagreed.

“Being bullied by someone hurts,” I told him. “It is painful both emotionally and physically.”

I affirmed that feeling embarrassed is a normal response. Especially when you feel like you weren’t able to avoid being hit. That’s how people who bully others operate. They look for people to prey on.

I’ve spent a great deal of energy in my life trying to avoid bullies, mostly by not calling them out and staying off their radar. But you know what I’ve realized? That’s no way to live. I sure didn’t want my middle school son to do I as did.

Have you ever been bullied? If so, I bet you have vivid memories of that experience. Most people do. Being bullied triggers thoughts and emotions that linger long after the event has transpired.

Most homeschool moms think that because they are homeschooling, their kids are safe from being bullied. That’s what I thought until it happened to my son. Sadly, as in the case of my child, homeschool students can be bullied by neighbor kids, at youth groups, while playing sports, at co-ops, and at work. It can happen in elementary school, middle school, and high school. The key isn’t to try and avoid all mean people; it is to teach and train our kids how to respond if they are targeted by someone with bullying behavior.

How to Tell if Your Child is Being Bullied

Young people who are bullied can experience negative social, physical, emotional, mental health, and academic issues. You will often see children who are being bullied experience things like, depression, anxiety, feelings of sadness, loneliness, and lowered self-esteem, as well as changes in daily habits like eating, sleeping, and they will often lose interest in things they once found joy in. A child that has been or is being bullied will complain of more health issues, as well.

You can also usually tell if a child is being bullied by their schoolwork. Their grades often go down and they just lose all interest in learning. The effects of bullying are varied. As homeschool educators, we know our children better than a teacher would in a public school and we can keep a close eye on what their academics look like. Although it won't look the same for every child, the effects listed above are the most common and should be watched for and considered.

Types of Bullying and Ways Your Child Can be Bullied

There are two ways that bullying generally takes the form of. Bullying behavior is seen through direct bullying, which includes bullying at a physical level for your child. Examples of direct bullying include being stolen from, being slapped, pushed, kicked, and damaging the possessions of someone. It also includes verbal bullying like name-calling, making insulting remarks on religion, making fun of your child's appearance, spreading rumors, making fun of social and economic status, and more.

Indirect bullying, which includes purposely attempting to destroy someone’s reputation, lying about them, expelling a person from a group, making negative body or facial expressions, and gossiping about someone.

Although these first two types may seem like just a part of childhood, they can be dangerous to the mental health, physical health, and spiritual health of young people if they aren't dealt with.

The most recent type of bullying, and in the world of bullying - the word of the day, is cyberbullying. This bullying is done through social media and the use of technology. Being bullied through technology can be done through email, social networks, text messages, and apps. It is important to watch your child's technology. Have passwords where you can check in on messages and activity to be sure that they aren't being bullied. Cyberbullying is dangerous and it is important that you know where your child is spending their time on the internet. You want to stop bullying as much as you can for your child, but when you can't, I've given you suggestions below to help your bullied child.

Suggestions to Help Your Bullied Child

If your child were to be in a traditional school setting when they were bullied, educators, guidance counselors, and principals might be called in to help. Bullying prevention programs are often seen in schools and sometimes they don't work, although they look good on paper. Since you are a homeschool family, you will take on the role of those school resources. Of course, bullying prevention is best when it works, but sometimes it happens whether we're watching or not. If your child gets bullied, here are some ways that you can help them through it.

Fear and avoidance of places or people are indicators of something that might be going on. Such sites could be a youth group, co-op classes, the park, sports practice, etc. If you notice hesitation or insecurity, then get alone with him for a few minutes and ask what is wrong. Trust your instincts. You know your child better than anyone.

Don’t assume he did something wrong.

Pay attention to how you gather information. If I’m not intentional about the way I enter the conversation, I will put my kids on the defensive by asking them what they did. The goal is to get your child to open up. Ask what the other person did first, followed by if he knew what provoked the bully’s actions. Accusing your child of causing the altercation might hinder communication.

My son was visibly shaken and fearful afterward. He needed to know that being afraid, even angry, is a typical response. Remind him it takes time to process the incidence.

Children who have been bullied need your love and support as they work through their feelings. Some kids want to talk about it a lot, while others, like my son, didn’t want me to bring it up. Knowing you’re available to listen makes all the difference. They don’t feel pressure to talk about it. Your goal is to soothe the hurt others have inflicted.

While being afraid and angry are to be expected, you must help your child move past the emotions and offer forgiveness to those involved — including himself if warranted, as was my son’s case. Forgiveness isn’t optional. If feelings of ill will toward the bully are held onto, it will only hurt the one bullied, not the bully.

If the person is someone they see often, you would be wise to be observant. It might be tempting to talk to the parent, school administrator, a coach, or a teacher, but I would recommend you discuss it first with your child. Many times the fear of retaliation or appearing incapable of handling the situation without mom or dad could strain your relationship with your child. That said, you are the parent. If you fear for your child’s safety or sense the situation is escalating, tell the appropriate authorities of the bullying behavior right away.

Years later, I would ask my son how he was doing. His emotional health, mental health, and spiritual health were my biggest concerns. Events during the teen years may trigger thoughts that cause him to doubt himself.

I can’t tell you how important prayer is when dealing with bullies. Praying together provides a sense of being empowered instead of being powerless. Throughout the process, point out the goodness of God. Remind your child God is our rock and refuge. He will not let others go unpunished. He fights our battles. 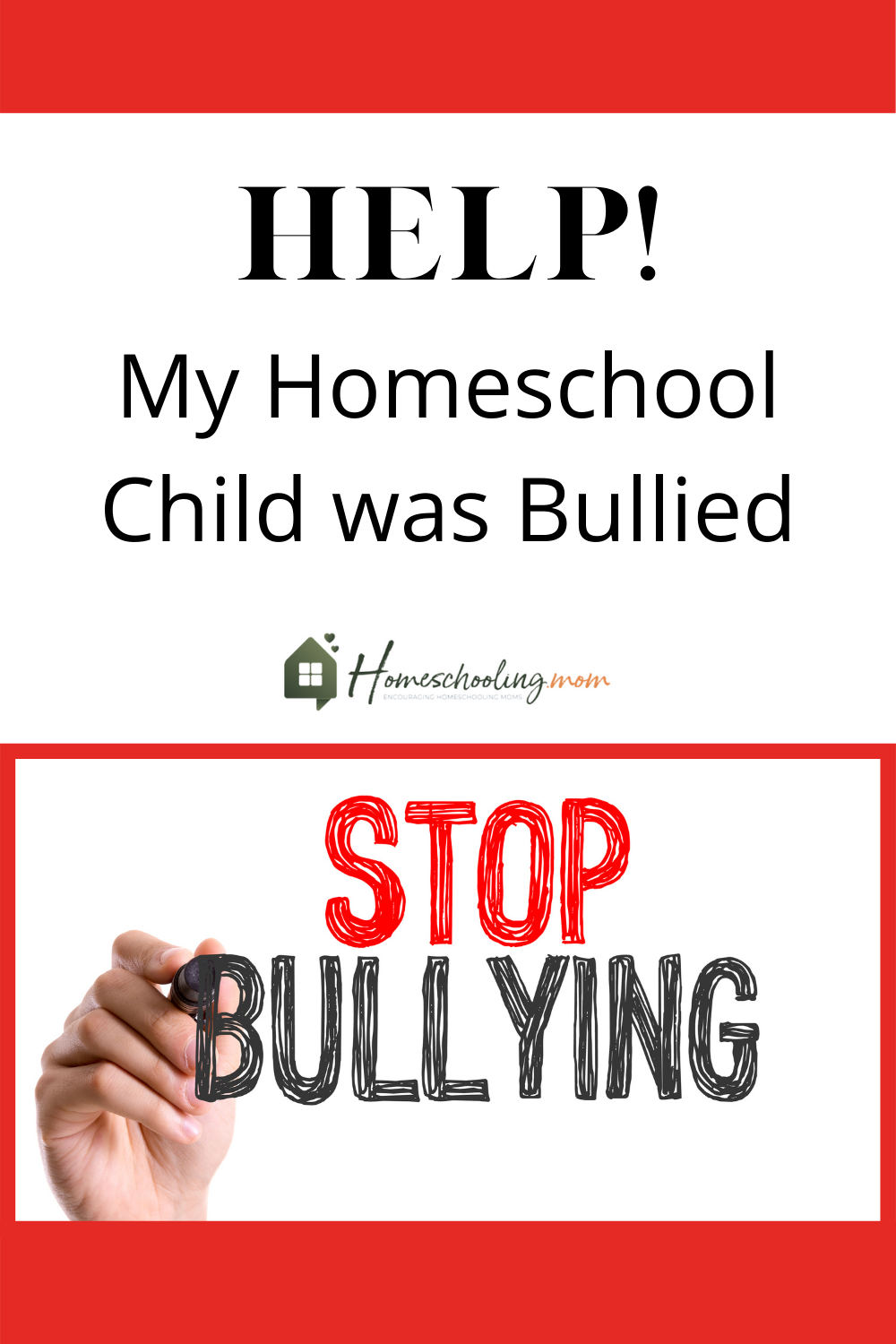 Looking back, I see how that unexpected walk in the park grew my then-tween into a wiser young man. It influenced him greatly. He learned to be careful with his words. He learned how to avoid being bullied. He learned he had someone to talk to and that he could trust his parents with his thoughts as he worked through the feelings. He also learned that it was important to be anti-bullying. When you are the one being bullied, it is easy to not want that for others.

Never underestimate your influence. A child needs a parent who will lovingly guide them through the twists and turns of life, especially when you won't be able to completely stop bullying from happening.

*I’m not a licensed therapist and am not providing such information. This post is based on our family’s experience and offers suggestions we learned in dealing with being bullied. Never underestimate the impact a bully may have on your child. The degree of bullying and the duration of such actions may require additional intervention from outside sources. If you believe your child needs to talk to a trained counselor to assist the healing process, then do some research to find local counseling centers to help. In seeking out a counselor, look for one who shares your moral and spiritual values.

bullies feelings forgiveness parenting Relationships
Previous PostDeschooling - an Important Part of Homeschooling
Next PostHomeschool Burnout is Real: Here’s What to Do About It
About the Author

Connie Albers has spent much of her adult life as a homeschool mom and mom-preneur with an outreach and ministry to homeschool parents through her speaking and various leadership roles. She is a respected leader, social media enthusiast, and trusted homeschool mom who understands the challenges of balancing the demands of life and homeschool. Connie is a wife and mother of five homeschool graduates. Her children continued their studies at the University of Central Florida on scholarship. Four have graduated and one is currently enrolled. She is a speaker and writer, a spokesperson, and owner of ConnieAlbers.com. Her latest venture is fulfilling her desire to equip women in their calling through her Equipped To Be ministry and with her website. The Albers family lives in Winter Garden, FL.