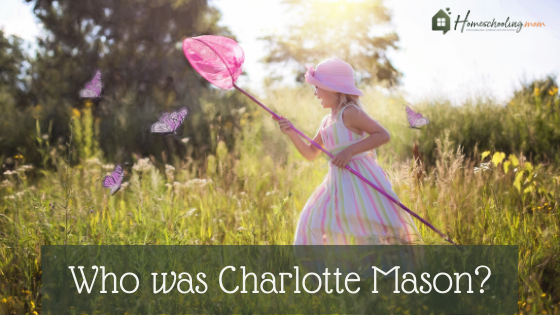 Who Was Charlotte Mason?

Who Was Charlotte Mason?

This post is, by no means, a comprehensive reflection on Charlotte Mason or the Charlotte Mason Method of teaching. For that, you’ll have to do far more extensive research. Today, we simply want to catch a glimpse of the woman behind the method. As you dive deeper into her educational philosophies, you’ll find, as I did, that her way of thinking can literally turn education on its ear. If you should choose to explore her teaching style further, there are many options online, and I wish you happiness in your endeavor.

Charlotte Mason, who lived from January 1, 1842 till January 16, 1923, was best known for her work in education, living in England about the turn of the century. With influences such as Matthew Arnold, John Amos Comenius, and John Ruskin, she created a system of education that we now known as the Charlotte Mason Method.

Charlotte’s mother passed away when she was sixteen years old, followed by her father’s death only a short year later. With no one left, she enrolled herself into the Home and Colonial Society where she gained a First Class Certificate in teaching.

As an only child, Charlotte had received her own primary education at home, instructed by her parents. She then went on to teach for more than ten years at the Davison School, located in Worthing, England. It was during her time there that she came up with the idea of a “liberal education for all”. The idea she expressed here with the word “liberal” was not defined then as we know it to be now. In her time, and for her purposes, the word meant that every child should have access to a very generous education, instead of reserving that right only for the rich.

Charlotte Mason had a philosophy that could best be summed up by the particular keywords she used in discussing education. Most importantly, she believed that the “whole person” of the child should be taught and not the mind only.

The very first rule of business for Ms. Mason, as it should be for all Christian homeschoolers, was a knowledge of God as revealed in the Bible. This is the primary thing, the most important thing, and to be stressed throughout the child’s education. Many other facets of a Charlotte Mason education, such as memorization, copy work, and reading Living Books, were interwoven with this truth.

A Charlotte Mason education consisted of short lessons that used Living Books, narration, copy work, and nature study, among other things. Afternoons were free, allowing the child to peruse the world at his or her leisure, learning more by actually having the “studies” in front of their eyes than simply reading about a topic in a lesson book. They were also free to pursue hobbies, passions, crafts, music, and any other activity that they greatly enjoyed.

You’ll hear a lot about Living Books if you study into the Charlotte Mason Method very deeply at all. These books embody “life on the page”, whether the text were non-fiction or fiction, and presenting topics in a way that simply made them come alive. They are interesting, are excellent pieces of literature, and provide topics that are extremely memorable and worthy of meditation.

Habit training was a means to develop the will of the child, aiming to give them a strong desire to act only in a manner that was right. This often went hand in hand with memorization, which is another important aspect of this educational method. Memorization was never used to simply call to remembrance cold facts, but rather to give the mind something meaningful on which to meditate. For this reason, poetry and Scripture were the main texts used for this purpose.

Ms. Mason’s approach to math could be the very thing that many need today. She emphasized “reasoning” as more important than simply “working sums”, which speaks to the child’s understanding of mathematics, as well as their comprehension of the same. Learning math from this ground-up approach is not new but has since been buried by years of government schooling that seems to have nothing whatsoever to do with the common-sense of actually learning.

Physical education was also important to Ms. Mason, and she included ample daily time for children to walk, dance, sing, stretch, and do breathing exercises to make sure that the physical body was cared for as much as the mind.

Ambleside & the House of Education

It was in 1891, when Ms. Mason was 50 years old, that she moved to beautiful Ambleside where she established a training school, known as the House of Education, where governesses were trained to work with children in their homes. She, herself, also spent this time teaching parents on how to educate their children. This was done in part through a series of books called The Home Education Series and through lectures.

Later, her curriculum was used as a part of the Parent’s National Education Union, or the PNEU, for homeschoolers to use in their own homes. Ms. Mason’s worked carried on a great many years after her passing, as the PNEU was still in existence in the 1960s. Her name and teaching styles came to a new light, however, in 1984, when Susan Schaeffer Macaulay published For the Children’s Sake. Today, in America and around the world, the Charlotte Mason Method is taught with renewed interest and vigor.

Ms. Mason wrote a great variety of books, many of which are used still today. Some of her most popular titles are as follows:

If you’re particularly drawn to some of the ideas discussed in this article, be sure to consider the Charlotte Mason Method for your own homeschool. A couple of great resources for this Method include Julie Ross’s podcast, right here on the Homeschooling.Mom website, called The Charlotte Mason Show with Julie Ross.

Julie also has a website dedicated to this method, featuring her own curriculum called, A Gentle Feast. Make sure you check that out, as well as her curriculum found there, by visiting that website HERE.

Stacey is an author, blogger, and former homeschool mother who loves to encourage and uplift, especially on the subjects of faith and homeschooling. She lives in Central Kentucky with her husband, Jimmy, and their two children. For more information, visit her website, Words From The Wheel.